China Through My Eyes…With My Dad

This trip to China with my dad was kinda a last minute trip.  It was a gift from me to my dad because he has hardly ever find the time to travel.  We booked this trip less than three weeks before leaving so it was a last minute crunch to get all our Visa’s and my dad an emergency passport since he misplaced his awhile back.  Looking back at my trip now with my dad, I can say it was very fulfilling knowing I was able to get up and go and take my dad on this journal he’s always wanted to embark.  He’s always wanted to go to China.  He’s talked about it ever since I can remember.  Initially when planning this trip, there was a sale with United Airlines to either Japan or China.  I initially wanted to go to Japan but my dad was really set on going to China.  Thank God my dad chose China because while we were there, Japan got hit with a devastating 8.9 earthquake.  I remember my dad and I were relaxing in our hotel room when he turned on the TV and saw the news.  Both our jaws dropped because that would’ve been us in the middle of the disaster.  We definitely counted our blessings over and over again and we walked around for the next few days pretty much in shock.

So for the next 10 days, my dad and I hit four states.  Beijing (3 days), Nanjing (2 days), Shanghai (5 days), and Hangzhou (day trip).  All four states are very, very different in their own way.  Both my dad and I loved Beijing the most because it had the most history and it’s just beautiful there.  We had our ups and downs while on this trip but I must say I learned A LOT about my dad and I will always take what I learned about him on this trip and hold it very, very close to my heart.  Talking and thinking about my trip with him gets me very emotional and to be honest, I’m sobbing as I’m writing this.  This is the closest I’ve ever been to him and the most alone time I’ve ever spent with him.  You have no idea how many times during our trip I’ll just stop and take in moment that I’m having with him.  It’s so foreign because like I had mentioned earlier, we’ve never experience anything like this together.  When I see his eyes lights up, my heart just swells knowing that I was able to give him that.  Since he doesn’t travel often, other than going back to Vietnam a handful of times, everything is very new to him.  He’s like a fish out of water and he’s fascinated by everything he sees and touches. Another part of my dad I didn’t know but it only makes sense since he’s hardly traveled.  Who knows when’s the next time we get to experience this again.  I can’t say it enough, I will always cherish this father and daughter trip together.  I love you dad.  You’ve suffered a lot of hardship in this lifetime by  leaving our country of Vietnam after the war to give us this life in America and I promise I’ll make it up to you by loving you more each and every day and making more memories by seeing more of this world together.  Sorry it’s taken me this long to do so…

This cute little girl was doing her homework while her mom was working. 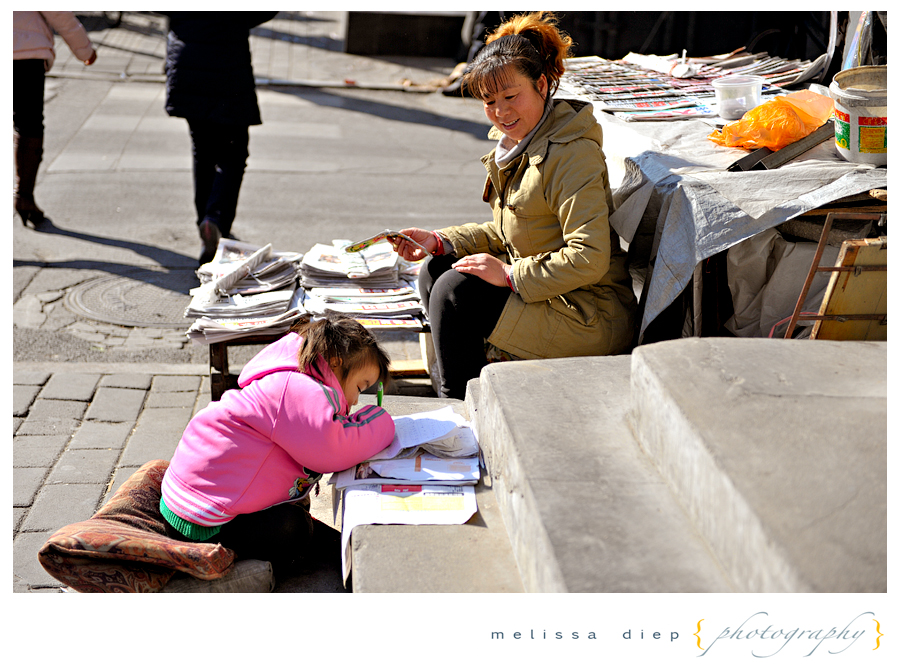 My dad and I LOVED the Forbidden City.  It was STUNNING!!! 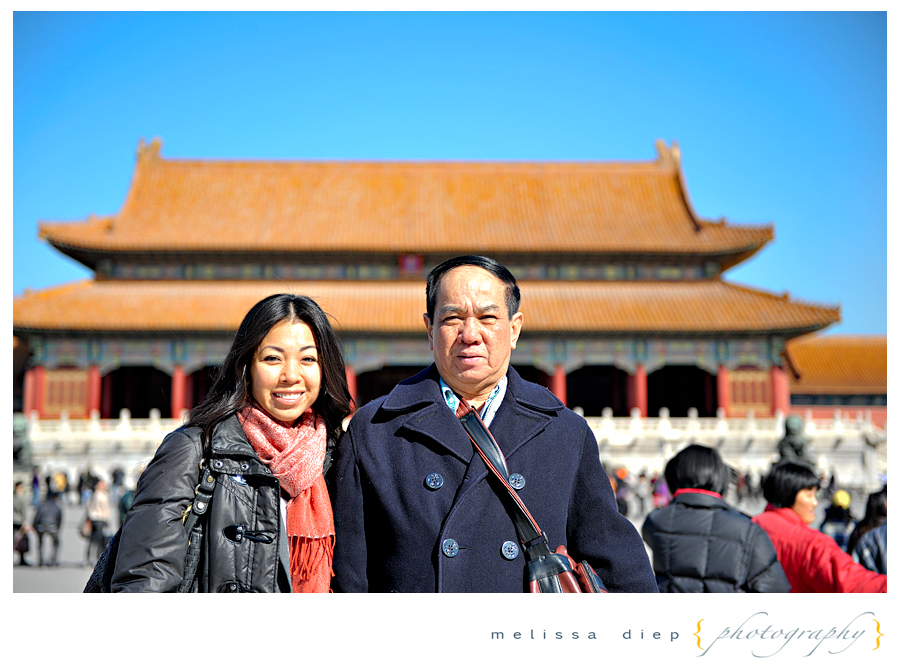 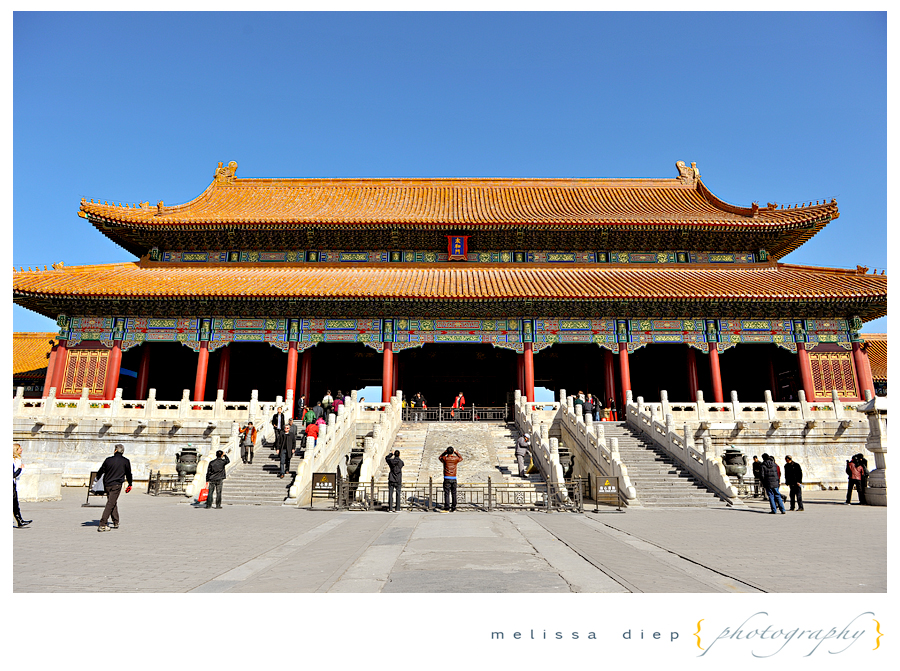 Everyone in China loves throwing the peace sign while having their pictures taken.  So….when in China, do what the Chinese do.

So after driving an hour and a half to the Great Wall, we only stepped foot on the Great Wall for less than five minutes.  It was a REALLY steep climb so my dad didn’t want to make that climb.  I had to force him by the ears to climb up just one flight for some pictures before leaving so after begging and pleading, he finally agreed.

Workers were pouring fake snow on the ground inside the Bird’s Nest for an event the following days.

Chaps…for kids.  I saw this pretty much all over Nanjing.  When I first saw it, I had to do a double take because I thought my eyes were playing tricks on me.  I didn’t DARE post what the front of this little boy’s pants looked like.  Let’s just say it’s got the same cut out as the back.

I saw these two conducting some type of business so I was curious.  I stopped in front of them pretending to view my camera until I realized this girl was getting her fortune told in the middle of an alley.

It took me and my dad about 30 minutes to climb up to the top of this mausoleum.  My dad almost quit 80x along the way.  When we made it to the top, you best BELIEVE I did the Rocky dance.  I tried getting my dad to do it but no cigar.

It was cold and super windy in Hangzhou but it didn’t stop these folks from getting their dance on!

So I didn’t take any pictures in Shanghai. I know, I know. We spent five days there but I didn’t take a single photo. Why you may ask? Well, simply because I got so tired of carrying my heavy camera around with me everywhere. It was exhausting! Once we got to Shanghai, all I wanted to do was put my camera in a safe and not think about it until we left. Lol. I know, it’s lame but try carrying a 10 pound camera ALL DAY with you! Lol!!!

Thanks for taking the time to view this adventure of me and my dad. I didn’t take many pictures throughout this trip but these were my favs. Leave a comment while you’re here!

« Chicago Trash the Dress-Spring!And That Makes Us Three… »